What are the most common gender biases in your community? Is it color choice, toy selection, attitude and characteristic grouping, division of domestic tasks, access to education, or occupational preferences?

Gender bias is a thought that supports or opposes one gender in acting and behaving.

Why should we care about gender bias? Because if this bias continues to grow, then it is possible to discriminate against one gender which has a detrimental impact on both genders. 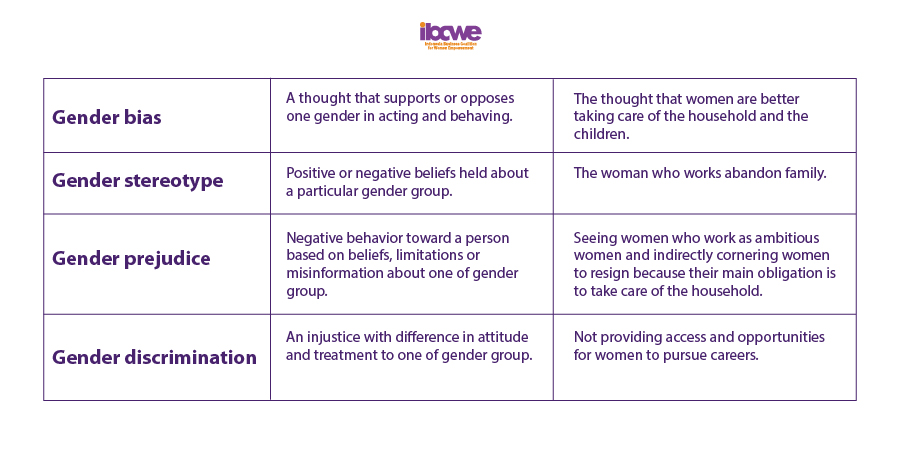 The disadvantages of gender bias can be in the form of high levels of sexual harassment and violence in both the domestic and public spheres, the fulfillment of the family and state economy is not optimal, and the burden for women and men to meet standards due to gender bias in the social and workplace environment causing mental health they are disturbed.

Consciously or unconsciously, we often do gender bias in our daily life. Maybe while we are chatting, watching, or doing work.

Let's learn to reduce gender bias starting from ourselves and the environment around us!

A complete discussion of gender bias and its impact on social and work life became one of the training materials from IBCWE entitled Unconscious Gender Bias.

There are 2 (two) levels of Unconscious Gender Bias Training for Organizations and Companies:

Understand and be aware of gender issues in the social & workplace environment and their impacts.

Understand and be aware of Gender issues in the social & workplace environment and their impacts.

Understand how to manage & implement gender-based practices & policies within the organization.

Interested? Contact us for more information to our Partnership Manager, Tedi Subagia,  through email tsubagia@ibcwe.id or message at +62 878-8572-0715